Fathers: If you are worried about breastfeeding… keep it to yourselves.

I have an app from a popular maternity service on my phone…primarily because the kids want to know what fruit is of a comparable size to their unborn brother and because people always ask me how far along I am and being on my fourth, I just can’t remember. I save my brain cells for remember things like when to pick the three kids up from activities, their birthdays, names…okay, so I have been known to call the boys by each others’ names. But I digress…

The app also issues a newsletter. Half the time I don’t open it but the subject line, “Breastfeeding Versus Bottle Feeding,” caught my attention. The “article” contained this little gem:
"If either of you have reservations about breastfeeding (some men worry about the idea of their partner exposing her breast in public, others worry about their territory being appropriated by baby, still others worry about being left out of the feeding process), put them on the table before you make your decision."

I’ve written on this topic before and my opinion remains the same. If a man is worried about his wife breastfeeding for any of the reasons above, he should shut up, man up, and grow up. Are there really any GROWN MEN out there worried about competing with an infant? Save it for when your teen beats you at hoops.

Oh, and next time someone talks about nursing in public being a recent attack on traditional family values, give them this photo: 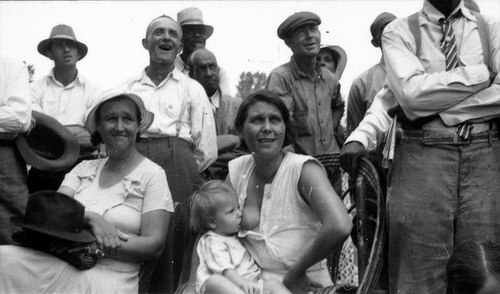 Woman breastfeeding a child while surrounded by others listening to speakers during an outdoor STFU meeting (credit)…it is the Southern Tenant Farmers Union but isn’t that just the perfect acronym?