Talk about overkill…this entire challenge was in need of some serious editing.

First, the contestants head to the Coney Island Boardwalk. The episode is “An Unconventional Coney Island.” Is there any other kind? 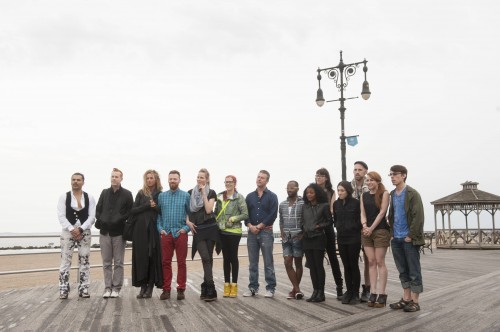 Once there, they find out they will be playing yogurt vendors with Yoplait Yogurt. They will be handing out free samples and the descriptive words from the public will serve as their inspiration. Already, that’s one too many toppings on that sundae.

Oh, and they are assigned teams. 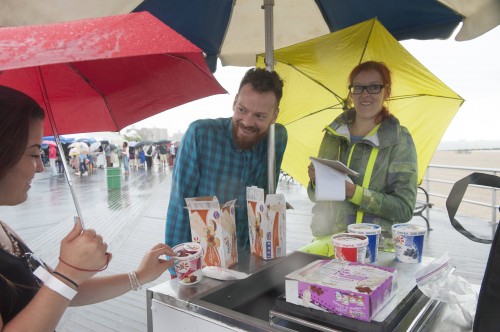 But because once you have one, you just can’t stop…this will be another unconventional materials challenge! With carnival prizes from Luna Park! So this is the team, unconventional materials, Yogurt inspiration challenge…never let it be said that Project Runway doesn’t reflect the real world of fashion design. Oh, and they will also have to do this challenge in two days, while standing on their heads, sewing with their feet…now dance for us, designers, dance! 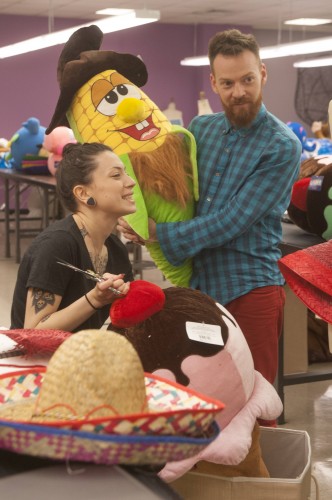 To their credit, the designers seem game, if a little nervous.

The designers are off to win their fabric and I wonder, what would happen if they are really bad at those games? I mean, they are all rigged, anyway, but I am terrible at carnival games. Except the darts. I always win at darts.

Alexandria exclaims with what passes for emotion from her, “I’ve never won so many toys in my life.”

Female Wisconsonite Miranda claims she and Sustainable Snowflake Timothy work well together. I thought she said she hated him? Well, we shall see. Timothy is just happy he won the unicorn and gallops off to the kingdom he is building in his head.

Back at the workroom, I’m worried for Kate and Helen because Kate is talking about another corset and their sketch looks like a southern belle 80s prom dress. They are giggling like sorority sisters, though, so at least they are having fun.

Sandro and Sue have already run into trouble as the Tsar of Tacky thinks Sue’s ideas look like drag queen wear. Pot. Kettle.

Supervillain Alexander “The Flamer” Pope likes the eyeballs on his prizes and that sounds creepy. Then he and Justin talk about “color blocking the bra top,” which sounds even worse.

No-Sew Sue is, surprise, surprise, still having trouble with machines and Sandro is just berating her into submission. They are both still trying to “make it work,” though, which is more than we can say for Miranda and Timothy.

Miranda is being a meanie-head and so Timothy is taking his unicorn and going home. Unicorns are also apparently more hippos than horses based on something about cloven hooves. Or maybe it is just this unicorn? I really don’t know.

Back at the hotel, Timothy finds a letter from Sophie, his model from the last challenge, about how inspiring he is. Oh, really? “Unscripted” my Aunt Fanny.

Back in the dysfunctional fashion workroom, a beaten-down Sue volunteers to submit to Sandro and he “respects that.” Later he says that “when women listen to the men, it is so cool.” Misogyny, it isn’t just for straight guys, anymore. At least, I think Sandro is gay. He had some weird discussion about the word “fluffy” and how it sounds sexual and then caressed one of the other male designer’s pecs. I don’t even know what I just wrote.

Miranda is trying to apologize to Timothy and Timothy is giving no quarter…but then they see their model in their design and they are happy and share a grudging hug.

Let’s leave this negativity and head to the sparkly lights of the runway and Kelly Osbourne’s lavender hair! 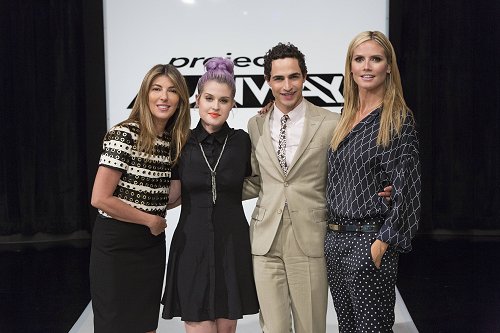 Heidi recaps the challenge and it is a MOUTHFUL! Let’s see what the designers made!

Sideshow: In the Middle 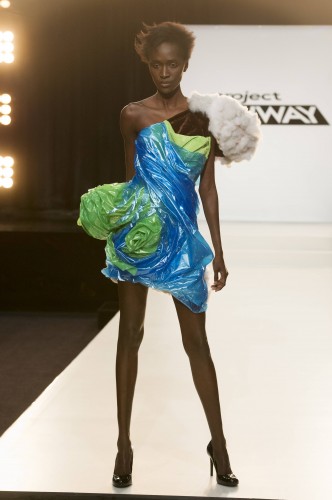 Bradon McDonald and Karen Batts: Bradon describes his design using (I think) the Yoplait inspiration words: “fluffy, adventurous, and awesome.” He adds: sculptural. I think it is insane. In the workroom, Sandro was taking notes about wanting to use this technique. I wouldn’t. This looks like Season 10 Designer, Ven Buddhu, took some hallucinogens and started making acid-trip roses everywhere. There is a green cabbage growing out of her hip and a cloud stuck to her shoulder. I could see how this could have worked with some serious editing but as it is it is just ridiculous. 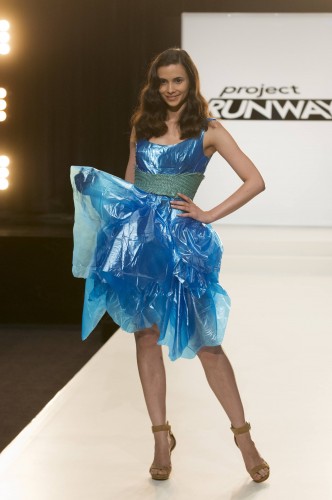 Sandro Masmanidi and Sue Waller: After all their fussing and fighting, this was just meh. I don’t really have much else to say about this except, why did the model keep fluffing the skirt on the way down the runway? Was something wrong with it? 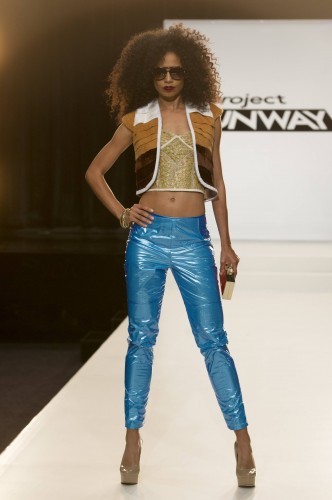 Jeremy Brandrick and Ken Laurence: I can’t believe I am saying this about electric blue carnival prize vinyl but, those pants are hot. I like how the Yoplait flavor colors are used in the vest. And that gold straw tank is perfectly fitted–looks itchy (knowing what it is) but really modern and chic. This could have easily been on the top.

We Have a Winner!: On the Top 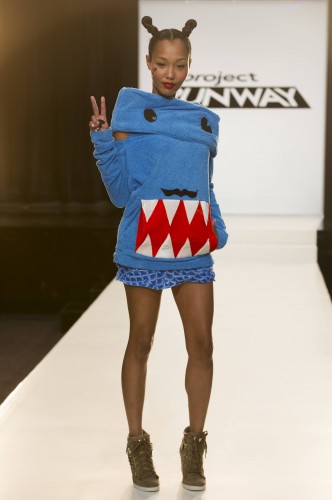 Dom Streater and Alexandria von Bromssen: These two really went with the Coney Island carnival prize materials and created a humorous Harijuku-inspired outfit. This made Kelly smile and think of Rave fashion which, according to her, is back in. Heidi is also having a happy and Nina calls it an “Instagram moment.” It was a risk that paid off for the ladies. Personally, I find it a little too literal of an interpretation of the materials–monster prizes transformed into a monster face sweater–but I do appreciated the lighthearted take on fashion. If it was going to be appropriate at any time, this is the challenge to bring on the fun. Alexandria gets credit for the design. 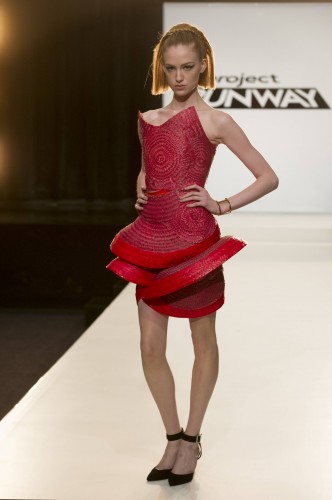 Helen Castillo and Kate Pankoke: Helen and Kate are clearly the ones to beat as they created a well-made dress that looks like fashion out of straw sombreros. Kelly is already gasping to Tim as the dress hits the runway. This team also scores brownie points for working so well together. Helen says Kate helped her with time management and Kate says Helen pushed her thinking. Heidi says it is a sculpture, art piece. Nina is having a high fashion moment, saying it is chic without losing whimsy, fun, sculptural, tailored. Kelly is amazed at how the sombreros were used and how it hugs the body. Someone instructed Zac to watch Michael Kors’s old episodes for inspiration because he calls it “sombrero Saturn chic.” Zac also says the dress reminds him of the rides at coney island, a neat insight. I would have brought the points on the bodice down a little but I have to agree that overall this was very successful. The designers used the materials well, drew on the inspiration of Coney Island, but still created something fresh, fashionable, and well-fitted. Kate says Helen should win because she brought the interest and art and Helen agrees she should win. Hey, Helen, if you want to get invited to the sorority, you are supposed to return the compliment!

At any rate, Helen is our winner and I can’t argue with that!

Fashion Freak Show: On the Bottom 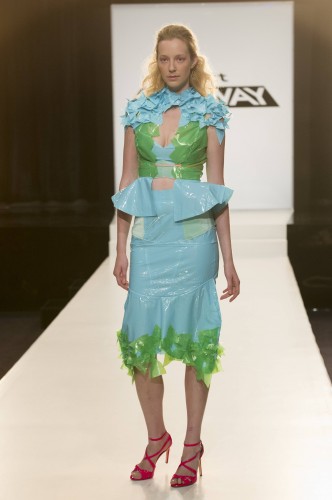 Alexander Pope and Justin LeBlanc: This is awkward but would be much better without the peplum. Justin realizes he overdid it before it even hits the runway. Zac confirms this during the critique, saying there is too much there. He describes the dress as having a kelp bottom, dorsal fin hips, and seaweed butt. He says he can see the work and techniques but the result is “Sea punk Skipper.” (I’m not sure the Korsatron 2.0 is working at optimum capacity.) Kelly points out that the color is bold enough without all the elements. Heidi says they need to “edit.” Nina imagines the team couldn’t make up their minds between fun kitsch and chic and so ended up with neither. The dress is much improved when they take off jacket and weird pink balloons that were hiding under the peplum. Later, Tim explains that he told the designers the dress needed something else. I think Tim gave good advice but the designers misinterpreted it.,That would make a great PR drinking game: take a shot every time a designer tanks because of misinterpreting Tim Gunn’s advice. 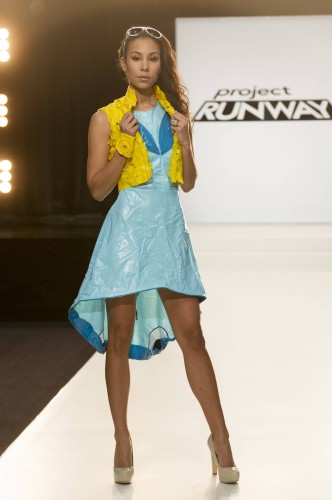 Miranda Levy and Timothy Westbrook: I honestly thought this was better than what they had when Tim came into the workroom. The dress looks less like a cheap knock-off of Disney’s Belle and the vest textile is somewhat interesting. The judges, however, rip into it. Heidi says it is boring. She does see the work in the bolero but it just doesn’t go with the dress. Zac says it is a deflated pool toy with a life vest: “She’s sinking!” Nina is savage: calling it a “toxic, biohazard bag.” Kelly unhelpfully points out that it might be cool in black and white if, you know, the designers had actually chosen their materials. Kelly also feels the two pieces do not go, like the two designers both had good ideas but the ideas didn’t work together. Miranda takes responsibility for the draping and pattern making and then she says she wanted to ditch the vest but admits to passive aggressively trash talking the dress behind Timothy’s back instead of just suggesting they re-work it. In the end, though, Timothy has been on the bottom every episode so far and I suspect his leaving in a huff while Miranda stayed to struggle with the dress was the final straw.

Timothy is out but he does win strangest exit soundbites. He has no regrets, except he regrets not dancing more–a regret I do not think his fellow designers or the audience share. He also reassures us he won’t stop believing in unicorns. Okay, then. Good to know.

Although I did not think this was the worst design, we are spared more lectures on sustainability and, thankfully, Timothy’s dancing.

Tune into Project Runway Season 12 on Lifetime at 9/8 central.