It is almost as if the producers heard the twitterverse and blogosphere say, “How many elements can you possibly fit in one challenge???” during the Yoplait/crowdsourcing/Coney Island/carnival prize challenge and decided to answer, “Ha! You ain’t seen nothing yet!” 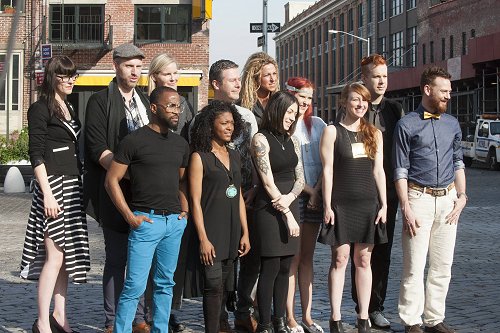 Let’s break this down: the designers are split into teams of three to drive a Lexus, which may or may not serve as an inspiration point…whatever! you choose! who cares as long as the check clears!…around town to at least two of three different locations to source unconventional materials. Each designer is responsible for one look but the looks must be a cohesive part of a collection. The suggested budget is $1500, which one designer will spend but the others must reimburse…and why did we need to know that let’s get shopping and sewing, people!

Team Ken, Alexandria, and Sue are off to a rocky start with Ken already moaning about being stuck with No-Sew Sue. I kind of don’t blame him but he’s not projecting make it work as an attitude here. Then, they head to the stores to shop and conflict ensues over which materials to buy and how much to spend. Sue tends to overspend and Alexandria just wants to get to work so Ken is ignored.

Justin, Dom, and Helen hit the food store looking for dried foods to serve as beading.

Alexander, Bradon, and Miranda focus on a color, white, and invest in some white and silver vintage wallpaper.

Back at the workroom, a sorta contrite Sandro comes in to say goodbye and apologize for being “an emotional, crazy Russian.” Dude, I totally get that but punching the cameraman is a bridge too far. He also gets in some confessional monologue that makes Dmitri sound like a native-born American. Based on the other designer reactions, either someone is piping Zoloft through the vents or there was another, softer side of Sandro we didn’t see. Either way, you can’t edit what isn’t there and he was a misogynist with anger management issues and so good riddance.

With that business out of the way, Tim gets on with his critique. He gives a quick “ecstatic” and “work hard” to Alexander, Bradon, and Miranda’s team.

Chatting with Kate, Jeremy, and Karen, Tim purses his lips when he hears about quilting. Helen worries out loud that maybe it will look too crafty. Tim urges them to find the sophistication. He also warns them to not just use $200 worth of place mats and make use of all their materials.

With Justin, Dom, and Helen’s team, Tim is worried that they only have wallpaper and only spent $600.

Sue, Ken, and Alexandria are most in need of guidance. Ken is being a total diva, staring down his nose at the ladies and proclaiming, “I don’t design for women over 40.” “Um, Heidi’s 40, ya jerk,” the internet collectively shouts. Ken explains they are also using place mats and Tim says he’s seen it already from the other team. Sue is using a curtain and gets a warning from Tim. Ken helpfully (NOT!) offers that he believes this “is the best thing Sue can do right now.”

It is runway time and Sue’s garment isn’t finished. Alexandria is trying to help Sue stitch her model in as they are walking. We later find out that Sue’s model finished stitching herself up in the bathroom. In confessional, Alexandria says she is torn between someone unpleasant (Ken) and someone who can’t sew (Sue). 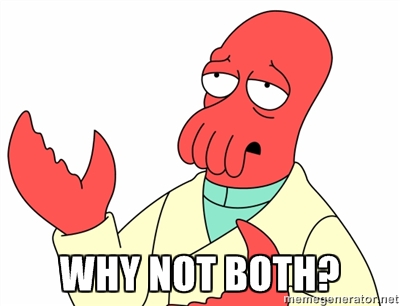 I say, why not both? 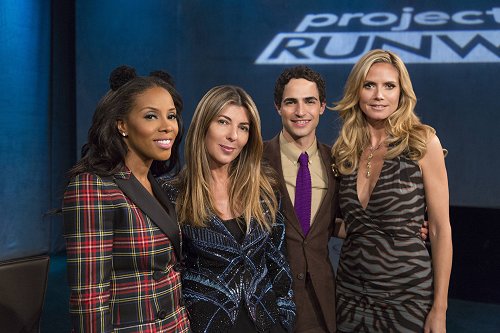 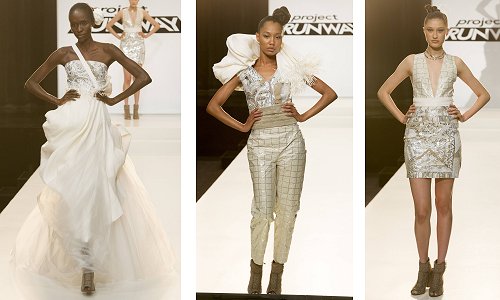 Alexander’s pants outfit comes out first. Those are some impressive fitting wallpaper pants but the dragalicious shoulder treatment has to go. Alexander needs to tame his not-so-inner drag queen if he is going to survive to the end. At least he brings the drama to his clothes, and not his workroom relationships.

Miranda’s cocktail dress is cute but a bit basic. Still, it fits well with the other designs.

Bradon really worked with his materials and produced something wearable with quite a bit of drama. I wonder if the judges thought he used too much fabric–I know their cards don’t have the designer names but I wonder if they list materials. If the idea is to use unconventional materials but make them look like clothing, then wouldn’t it be possible to be too successful? He is clearly a front-runner for going to fashion week with good instincts and construction skills. Either way, I think his model is going to have no problem landing work in the future.

This team is safe but was “a close runner up” according to the judges. 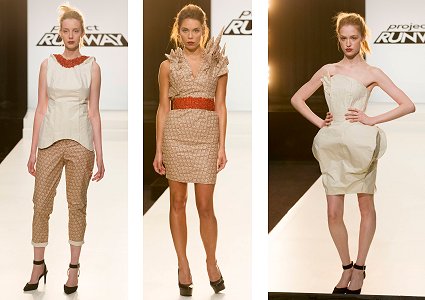 The term “meh” pretty much sums up this team’s efforts. They started with a decent design in the wallpaper (and kudos for color) but then relied too heavily on the wallpaper, using the reverse for relief from the pattern.

Justin’s pants had a dowdy fit…maybe he should have gone 7 years between his pants making attempts…and that top isn’t doing the shape any favors.

Dom’s was, no surprise, the best of the three. However, she got carried away with those shoulder stalagmites in an attempt to cover up their lack of materials and her rather basic design.

I have mixed feelings about Helen’s. On the one hand, she at least played with volume and silhouette instead of just creating a basic dress and gluing on stuff. On the other hand, it is a stiff mess. 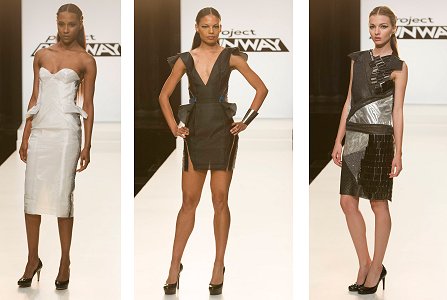 Jeremy: I do not get the love the judges had for this dress. Heidi likes the fit of the bust and I think it makes her look small and droopy at the same time. I don’t even know what is going on with those sad, weird flaps. And the judges acted like the ombre glitter racing stripes were Just! So! Innovative!

Karen: Although this is not to my taste, I get the idea of it as fashion. It looks a little haphazardly pieced together to me but I could see the right actress pulling this off–or the wrong one landing on the worst dressed list. Either way, it is a dress the style press would talk about. So, I’m willing to accept the interest and the concept, if not love the result.

Kate: I thought Kate’s dress was borderline vulgar and thought her model could barely walk in it but the judges ate it up. Nina love the rice used as faux stitches. June Ambrose says, “clavicles are the new cleavage”–which, huh?–and then follows with the winner, “I plan on not eating tonight to fit into this one”–which, just…ew…gross.

Jeremy is the winner for this challenge. I think his garment was lackluster compared to Bradon’s but he seems like a nice guy with decent skills so, congratulations. 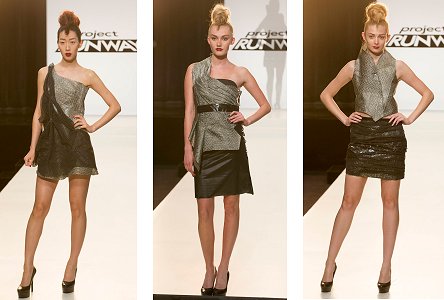 I think everyone knew this team was in trouble in the workroom and then the models walked out looking like sloppy Robert Palmer girls. She’s so hiddy…there’s no telling where the money went…

There’s at least a cohesion in the sadness of the designs. Unfortunately, it looks like I gave my seven year old daughter some old place mats and allowed her to create three dresses for dolls.

Zac Posen says the material, sewing, and taste are all bad. Sorry, I have to trot out Zoidberg again… 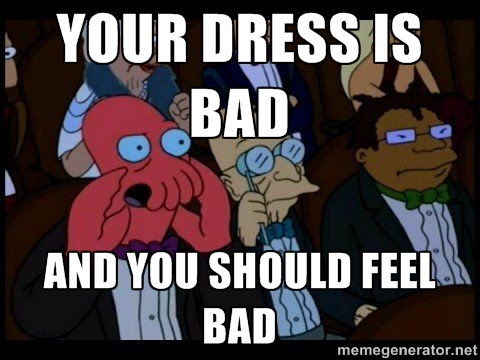 Nina is shocked they almost maxed out the budget. She says they looked like they were trying for funky and edgy but she sees no luxury and none of the expected fantasy.

Ken starts to toss Sue under the bus, which is both expected and somewhat understandable. Nina points out, though, that all three of the dresses were unsuccessful.

Alexandria says it is a tough call because although Sue needed a lot of help, Ken’s attitude also made teamwork impossible. I’ve heard some backlash about this on the Internet–people think Alexandria is a double-crossing back-stabber. However, I didn’t see her really acting so friendly towards Ken. She seemed pretty clear that she didn’t like his attitude but also didn’t want to engage in a time-wasting fight.

Sue protests that she can sew but it is too late, this ship is sinking. During the closer examination, the judges decide that Alexandria can sew and did at least have some nice ideas. Nina likes the back of Sue’s dress more than Ken’s but, in the end, the revelation that Sue’s model had to sew herself into the dress is just too much for the judges to handle. Sue showed poor judgment choosing fabric for an unconventional materials challenge and then couldn’t even finish a flawed garment in time for the runway. No-Sew Sue is gone.

Ken is left hanging because I guess the judges like to poke tigers but, in the end, is safe.