In the opening sequence, Ken is still seething from Alexandria calling him out on the runway as a jerk. He says she reminds him “of Judas…in the Bible…” as opposed to all those other people named Judas? Also, over dramatic much?

It is getting too stressful in here..time for a change of scene! 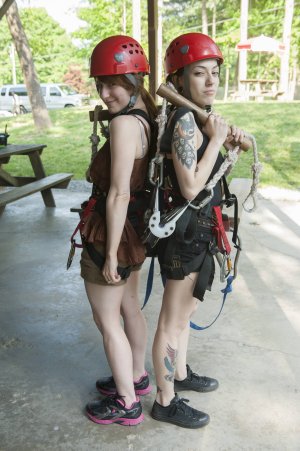 Tim, looking like the proverbial cat who ate the canary in his camo suit, enters with Heidi to announce that the designers are going glamping (you know, glam + camping?) for their next inspiration. 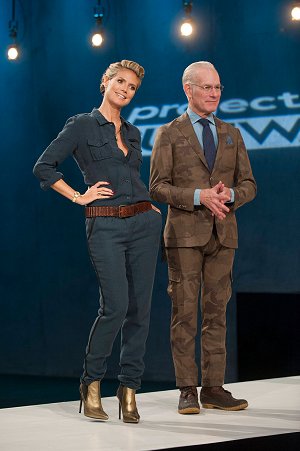 Kate seems to think she’s going to the Hunger Games and offers she can use her own blood to dye things. Miranda wants to play paintball because she wants to shoot some people.

Hate on the neologism all you want but I think this looks like fun…all the outdoors with none of the effort. 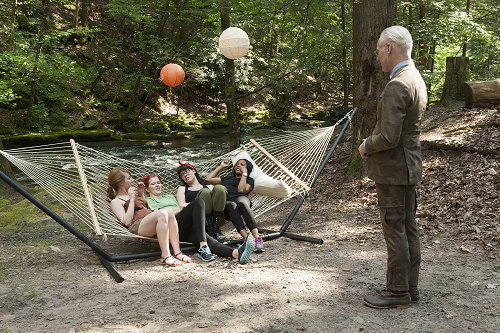 The remaining designers gather to hear that a sponsor that shall remain nameless on my site because they are owned by my least favorite company in the entire world has sent them glamping so they can gain inspiration from the outdoors. 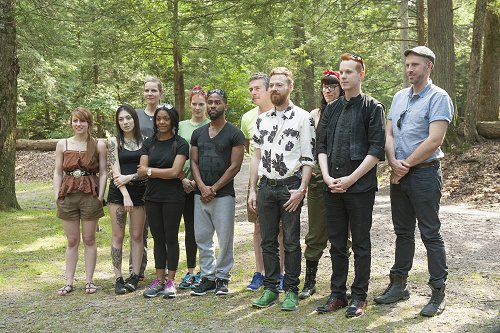 I’m a pale gal who would be right at home with this lot but Helen is so pale…I think she’s a day-walking vampire. 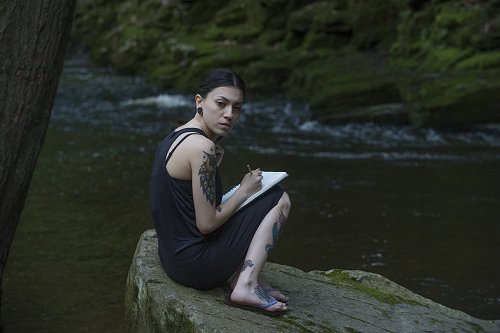 Alexandria is in survivor mode with her head scarf and feels she’s been “flagged” as on the bottom.

After a lovely day of glamping, the designers head back to the city and hit mood with their suggested $300 budget.

Karen is inspired by white tents…because every woman wants to look like a giant tent. Oh, Lordy.

Justin wants to create his own lacework.

Bradon is buying lots of chiffon, which makes me think costume and crafty.

We do get a nice tongue shot of Swatch, superstar dog, before the designers leave Mood.

Back in the workroom, Tim says things are more tranquil. He thinks the glamping relaxed them but I think it is the lack of teams, especially with the designer with the weakest skills gone.

Tim comes in for his critique.

Tim fears Karen’s tent dress will be too simple (and I mentally add, “voluminous, shapeless, and unflattering) so Kate offers “ombre?” Remember that annoying commercial on a previous season that played 10 times an episode and defined ombre for us?

Justin is using his glue gun to make lacework and Tim is happy he is pushing things.

Alexander is making “ombre bark” out of leather (there’s that word, again!) and Tim warns it could be bottom heavy and too separated.

Bradon is embroidering and calls it “thread painting.” Tim says it looks like a kid’s drawing.

Alexandria is going in a completely different direction. Tim likes shape of the jacket but hates drop crotch pants on general principle…as do most sane people.

Ken says he is inspired by water but his fabric is telling a different story for me…heavy green and red water?

Jeremy is inscribing his fabric with a love letter he wrote to his husband.

Helen is inspired by a moth dying in the bathroom sink????

Before we hit the runway, Bradon is having trouble finishing. At the fitting, he had only a collar to try on his model. That poor model always gets stuck with something tragic. I would love to see a confessional of what is going on in her head. 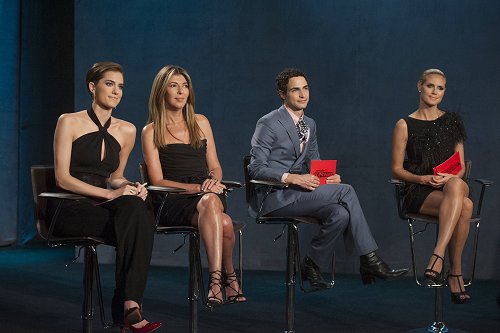 Heidi comes out to review the challenge and introduce the judges (Allison Williams is guest judge). She asks if there were marshmallows and makes a weird slurping sound. Heidi is getting more and more odd…I like it. 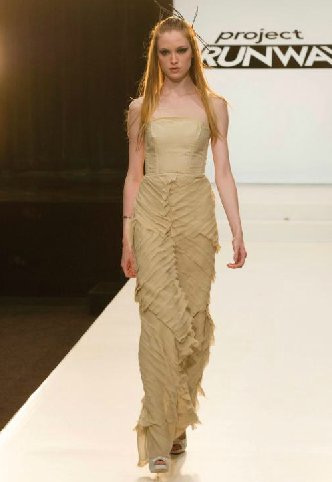 Helen Castillo: This is pretty but I’ve seen it before. While the color works with her inspiration, it is also the color of old undergarments and too close to the model’s skin tone. I think she would have been better off mixing some other neutrals in there. 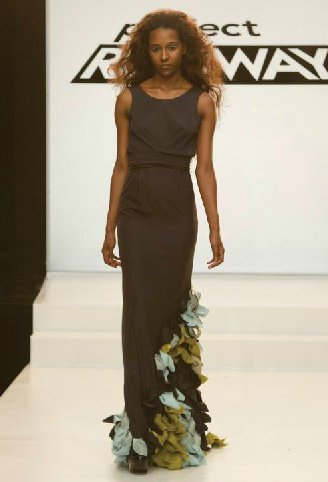 Miranda Levy: I can see inspiration. Miranda says it is leaves on a tree trunk but I see lichen and I’m liken’ it. The dress itself has some interest but maybe lacked enough drama to get her a spot in the top. 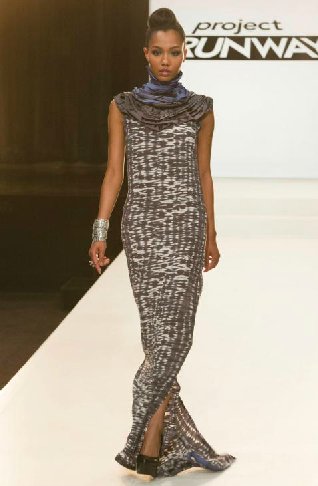 Dom Streater: I would have liked to have seen this in the top. There was a nice movement created by the pattern and an interesting evocation of nature without being too literal. 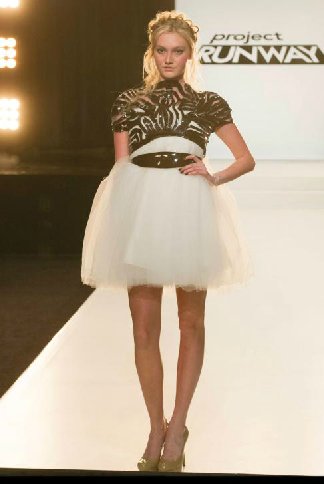 Bradon McDonald: Cheap, amateur costume for A Midsummer Night’s Dream. This is not a flattering shape and looks tied on and easily could have landed in the bottom.

Queens of the Jungle (TOP): 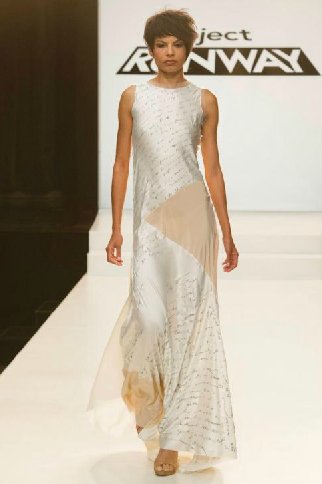 Jeremy Brandick: This fits well and I like the narrative but thought it would be too bland to land in the top. Zac, however, called it “sonnet chic” and noted he’s “a sucker for bias cut.” Nina likes the buttons (I think they are somewhat bridal) and the chiffon trim. I’ve seen some cynical commentary that Jeremy always seems to have some back story. Even if he is doing this to play the game, I also don’t find it at all unusual for an “artist” to need a story as part of his creative process. Overall, it is lovely and romantic and I don’t mind it being in the top, although I would have preferred Dom’s over Jeremy’s. 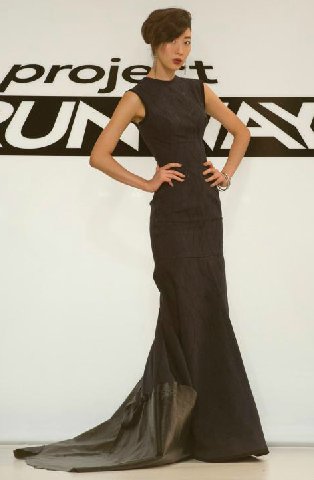 Alexander Pope: Heidi thinks the fit is ridiculous in a good way and pretty much all the judges agree, as do I. The fit is so outstanding, Nina wonders if she is sewn in (she’s not; Alexander shows them the side zipper). There is some discussion about the dark color and the hand painting, which does not wow Zac but Heidi says elevates the piece and Nina finds dramatic. Zac also feels the seam in front cuts the model in a “hard place.” The big controversy is the leather train. Heidi is on the fence but ultimately likes it, Nina likes it, but Zac is not wowed. I think the train is way too stiff. I like the leather there and on the trim but I think he needed some way to create more movement. 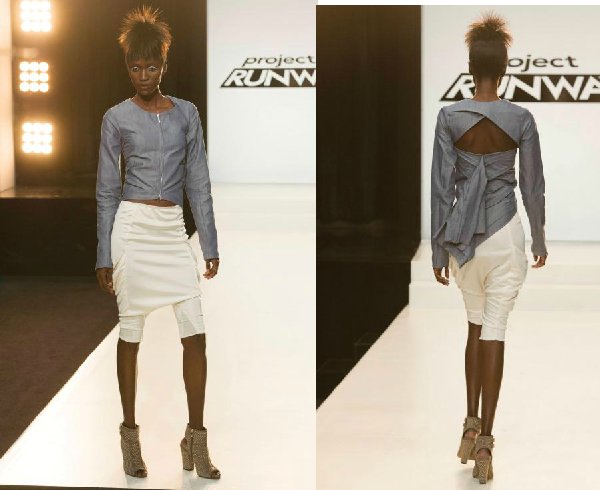 Alexandria von Bromssen: Let me start by saying that this is definitely not my cuppa and is definitely entering man repeller territory. That out of the way, this definitely is on trend and is Fashion. I also think that Alexandria is the only one who tried and succeeded (Karen having tried and failed) to create a glamping outfit. The others primarily made dresses inspired by nature. Alexandria took a risk and designed something that could theoretically be worn on a luxury camping trip. Once again, a designer benefits from Ya’s amazing modeling, though this time transforms her by covering her up. I could have done without the make-up but the booties are perfect for the look. Heidi says she took a huge risk but it worked. Nina says it is “modern, cool, draped” and that she made denim into a luxurious and editorial jacket. Zac hates “poopy pants” but was sold on the runway. I would have liked to have seen a neater back on the jacket–Nina liked it but I find it a bit sloppy for this look. All in all, although I would never wear this in the past, present, or future, I can see why the judges awarded this the win and I look forward to more deadpan statements from Alexandria. 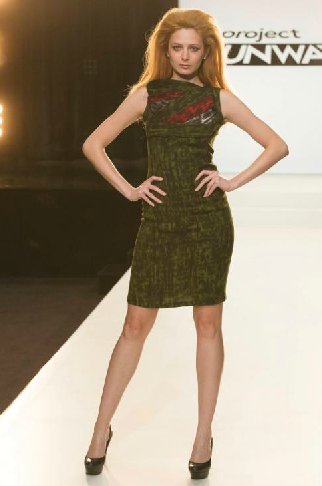 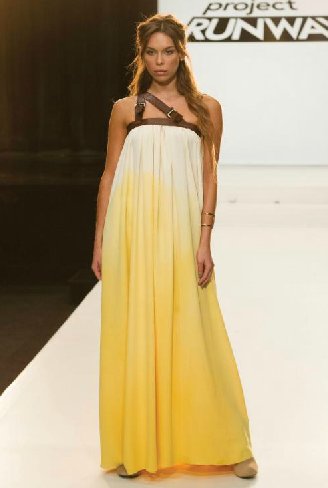 Karen Batts: Just awful. It says camping in that it looks like this woman took a shower and her friends stole her clothes so she tied a towel on with her belt. And then they spooked her because it looks like maybe she peed her pants. Karen thinks she could be in the top. I think she’s delusional. Heidi calls it a trashy mumu. Nina says it is part beach, part rodeo and wonders where this woman is going. Zac sees runny eggs. 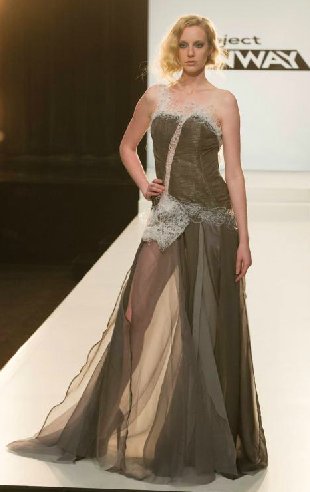 Justin LeBlanc: Poor Justin. I don’t think Tim’s advice led him astray so much as Justin just became too wed to his technique and too committed to going big. He’s been too safe in previous challenges and wanted to make a statement but a little glue gun lace goes a long way. I think this was at least a decent design with some interesting ideas but the judges are right, the placement of the glue lacework is a total fail. It is Nina’s turn to fill the void of Kors’s quips and she says it looks like a “foaming vagina.” Oh, dear. Heidi says it looks like a Halloween costume and feels compelled to add, “from a cheap place…like the ones you get in a transparent plastic bag.” If you have seen Heidi’s Halloween costumes, you understand her need to clarify. Justin is so nice that even Zac tries to mitigate some of the criticism. He likes the color of the chiffon “…a nice modern color.” Talk about damning with faint praise.

Justin out and all the designers are crying because Justin is a real class act who went out taking a risk.

Tim Gunn decides to use his save, not because Justin is such a nice guy, which he is, but because Tim says Justin needs more time to show us what he’s got and adds, “I believe the judges made an error.” Ouch. I agree with Tim that there was another designer who should have been auf’d *cough, cough…Karen…cough, cough*. However, Justin’s was also pretty awful and there was probably a more politic way of saying that. He could have just said he admired Justin’s courage and regretted not giving him better advice.

So, Justin survives to sew another day.