I haven’t seen Frozen, yet, because I let my parents have the privilege of taking the kids…but I hear it is stupendous and can’t wait to watch on DVD.

In what may be one of the most clever tie-ins to a movie (though I am waiting to hear that Disney World’s Blizzard Beach is getting a Frozen make-over), Disney announced a Frozen-inspired suite and activity cave at Quebec City’s Ice Hotel. 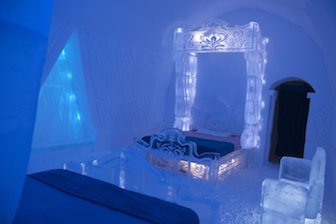 Created entirely out of sculpted ice and snow and supervised by the film’s art director Michael Giaimo, the “Frozen Suite” is modeled after Anna & Elsa’s bedrooms. The collaboration will also include a “Frozen Activity Cave” bringing the wonder of Disney’s wintry tale to life like never before. The suite will be unveiled this weekend and remain open through March 23.

I love traveling and in the BC (before children) era I used to be pretty adventurous…but an ice hotel just is not on my bucket list. You sleep wrapped up in a super-warm thermal cocoon-like sleeping bag. Extreme temperatures just isn’t my thing. I would definitely be interested in visiting for a few hours, though, just to see it. How about you?