Welcome back to the runway! So, I missed the first 20 minutes due to kiddo bedtimes but there did not seem to be that much drama. We shall see what happens once inspiration and energy starts to flag… 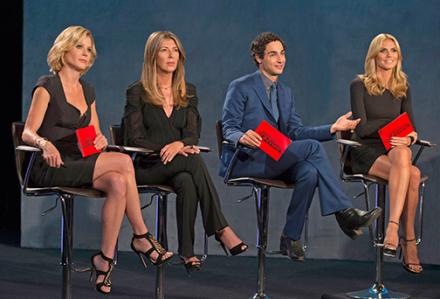 Is it just me or does Nina look totally over this?

From what I gather, the designers were given a box of cheap, ugly material to make something for a “Spring collection.” Which is appropriate since this sponsor just screams “high-end fashion”: 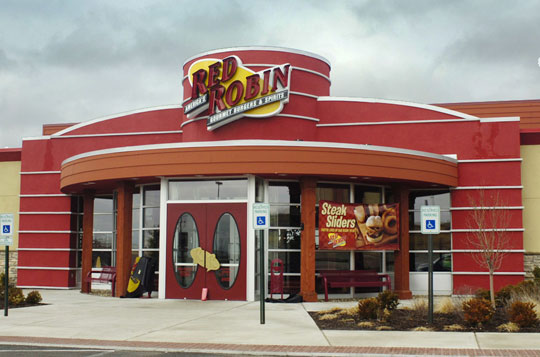 The designers could trade fabrics but since everything was ugly that did not help anyone very much.

OK… let’s do this. Starting with the vast middle. 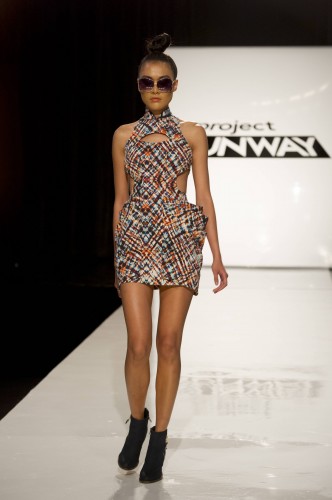 Let’s get this out of the way first. Caroline Sleutskaya’s design was the clear winner in my eyes. There was design. It was on trend and spring-appropriate. She made the cheap fabric look expensive. The styling worked. How this didn’t even break top three, I do not know. 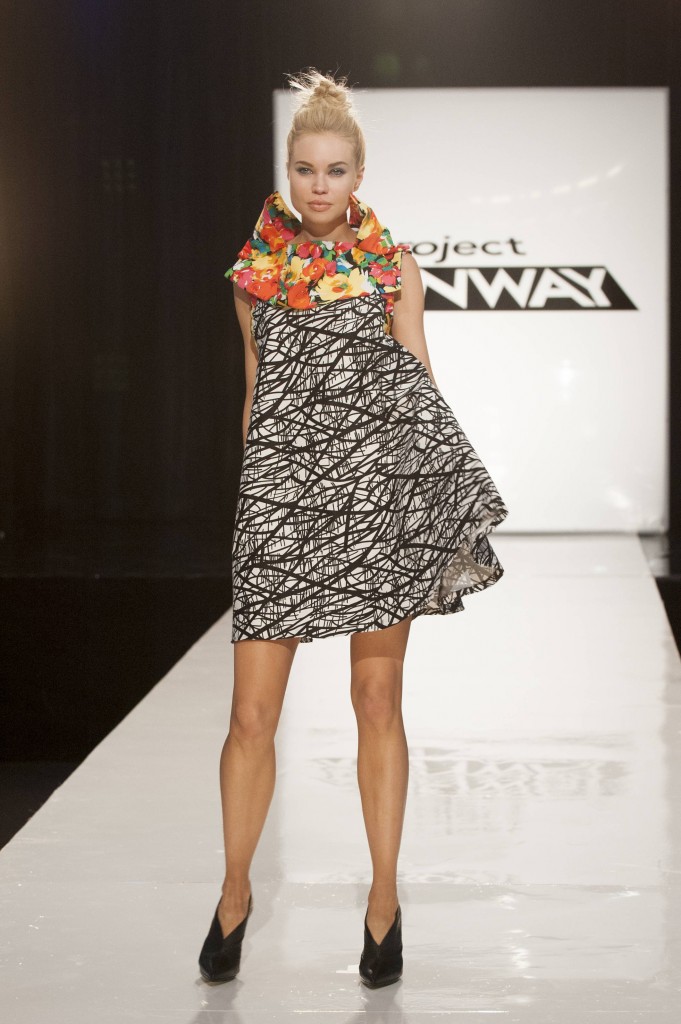 Alexander Knox’s dress was just okay. Not much design going on but it does look like something vaguely fashion-y. Kind of like a liberal arts major tossed her couch throw on her “edgiest dress” to try to sneak into a gallery opening. 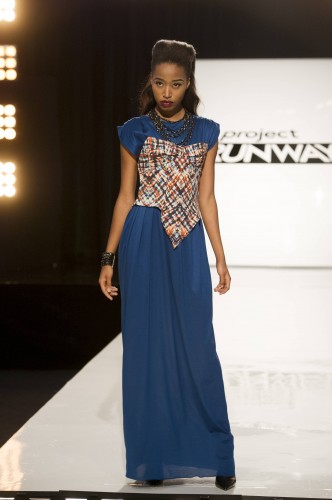 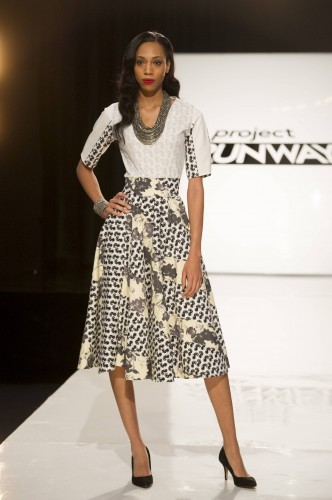 Fade Zu Grau: Not half bad. He shows good instincts by covering up some of the fabric with an overlay. The styling is a mixed bag. On the one hand, I could almost see this on Zoe Saldana, thought that may be mostly the model…on the other hand the styling is a little too conservative for the runway. Also, the sleeves are awkward. Still, not a bad first entry. 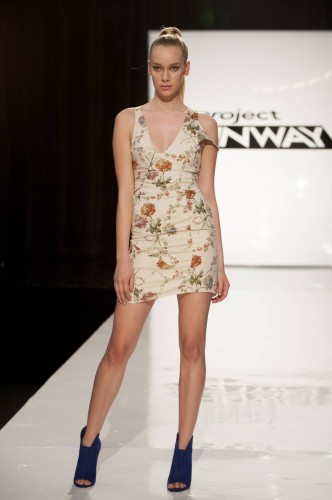 Hernan Lander: Too tight. No design. Looks like a streetwalker after a bad night. 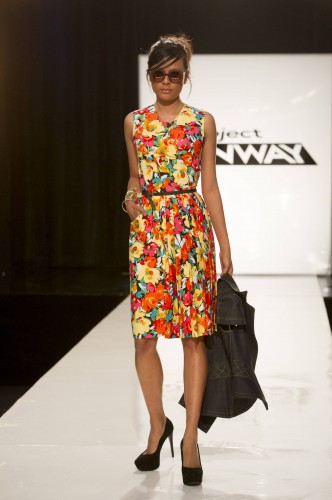 Kini Donovan Zamora: 1993 called and they want their low-end department store dress back. Seriously, I may have had this dress in high school for when I needed to look presentable in front of adults. 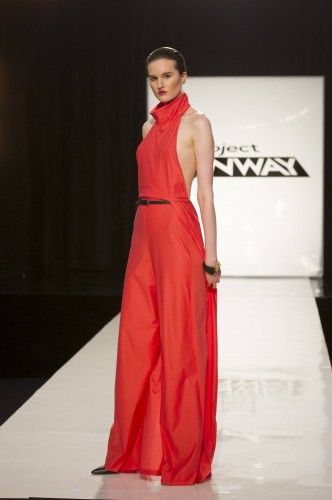 Korina Emmerich: There’s some drama here but nothing particularly original. And the Robert Palmer head with the wide-legged pant silhouette is giving her pinhead. 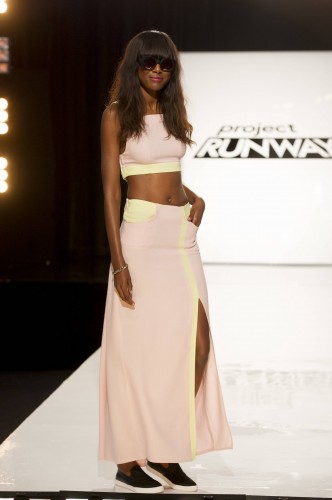 Kristine Guico: I have to imagine this barely scraped by. Why are people trying to bring back the 90s? She’s lucky her model had gorgeous dark skin because these colors would have been even worse on a paler woman. 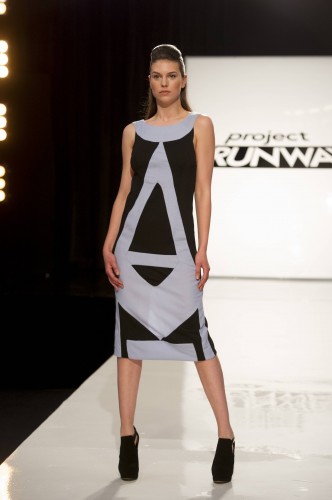 Sean Kelly: I’m not sure this is the most flattering color-blocking I have seen and it does not exactly scream, or even whisper, spring…and it is somewhat of an avoidance, rather than an embracing of the ugly fabric challenge…but this is at least visually arresting and well-made. 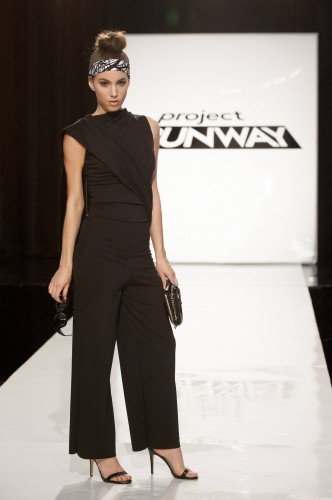 Watching on television, I thought this was a decent design if not exactly spring-y and a bit of a cop-out on the fabric. Looking at the still: OMG… look at that crotch… Samantha Plasencia, what is going on there???

Now, let’s see who sprung to the top! 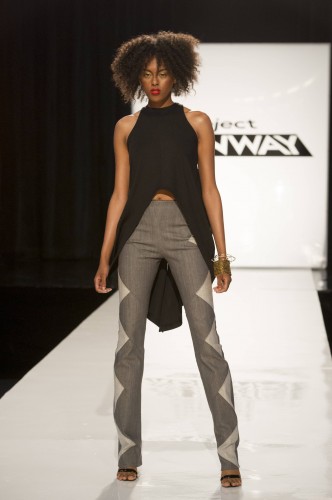 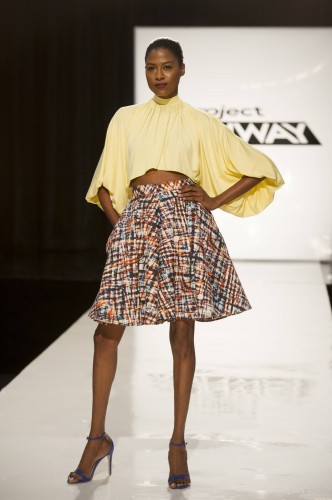 This was cute and definitely hit the right spring note. Nice color sense, including the shoes. Maybe a bit basic but well-made and put together and fit the bill. I thought Charketa Glover had this in the bag but no… 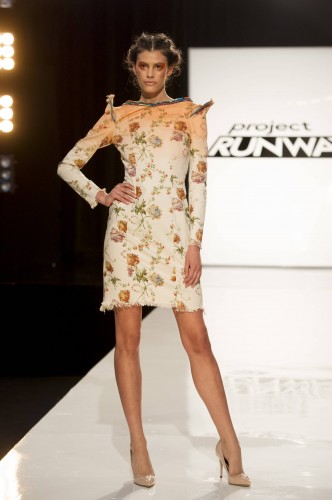 Sandhya Garg seems really sweet and like a thoughtful designer. So, I am trying not to be too snarky here but…I guess when the design brief said “spring collection” they meant “post-apocalyptic nuclear spring.” 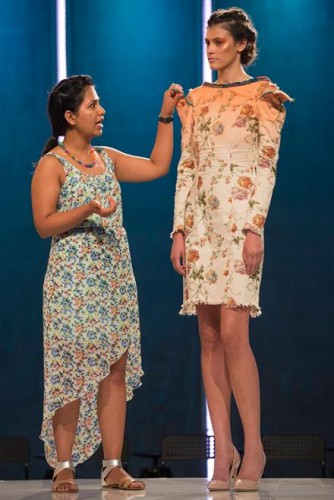 Yeah…I really don’t get those shoulder flaps, either, girl. I like that she dyed and frayed the fabric to try to do something with it. She had a narrative, which always helps with the judging. Still, I don’t really understand how she got into the top three initially. The hem does not match up. There is pulling and wrinkling across the middle. And that shoulder … I don’t know… zipper vent thing?

Points for originality, I guess. 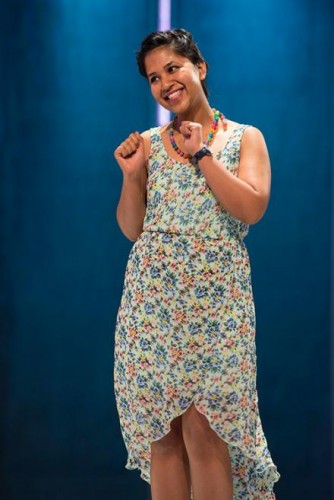 Time to look at the bottom. Yes, Tim, I am concerned, too. 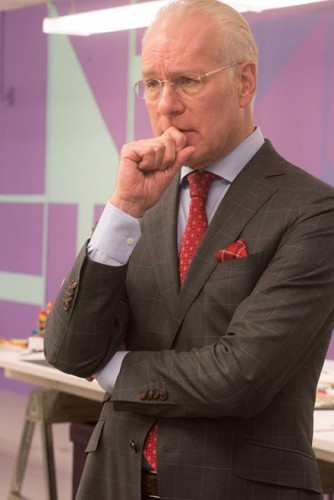 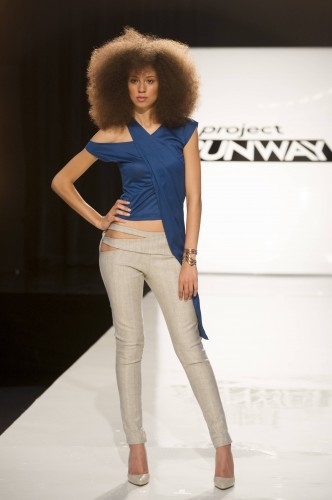 Angela Sum’s look suffered from time management issues, I think. That and her tendency to break down and weep makes me think she isn’t long for this competition. The top needs editing but I like the color. And, look, true, the pants were one sashay away from a wardrobe malfunction. However, Nina, dear, calling those slits “sluts” was not really that clever. Especially when your co-judge/producer is wearing this… 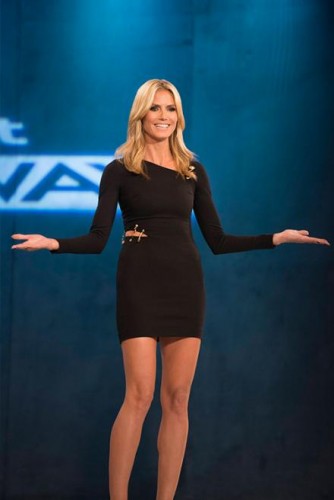 True, Heidi’s peekaboo was more under control but I bet the designer of that dress had more than 24 hours to design, construct, and fit it. 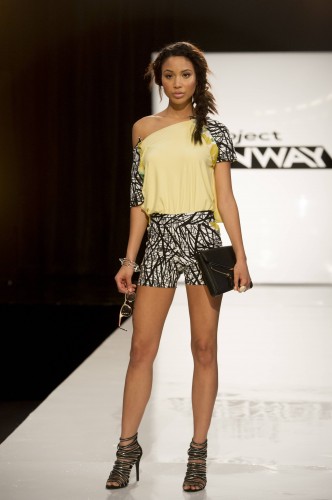 Mitchell Perry’s design was very Junior. And very poorly constructed. I’ve seen some people saying this should have been the Auf’ but for “The Mitchell’s” potential for drama of the non-sartorial kind. However, I can also believe his styling saved him here. 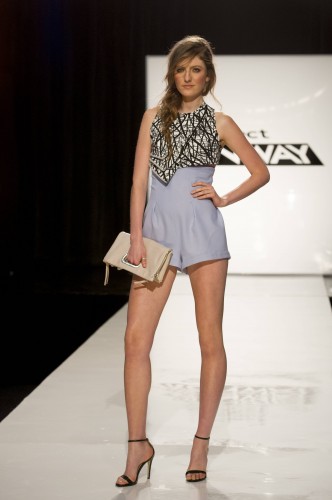 And it is hard to argue with Jefferson Musanda for the Auf’. That crop top was a nothing. 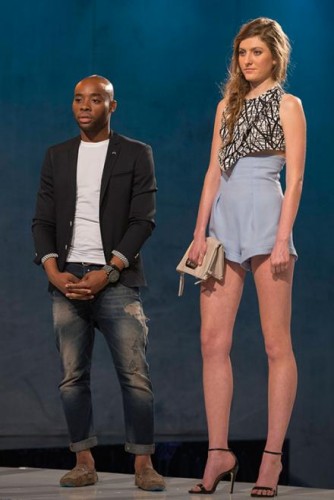 If you make the mistake to design high-waisted, flare-legged short-shorts for an Amazon, you don’t then double down and give her five inch spike heels.