I have been seriously neglecting my recaps this season–Fridays are just very busy days! I couldn’t resist this one, though. The designers are challenged to make outfits inspired by some of American Girl’s classic historical dolls that are part of the BeForever line. 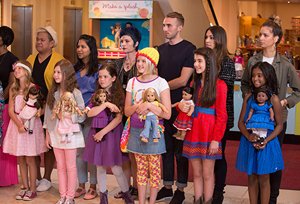 Like many 8 year old girls, my daughter adores American Girl dolls and their stories.

She was considering an sewing camp for making outfits for her American Girl Doll but it conflicted with robotics. I think with a week of sewing lessons, she might have outdone the contestants.

The contestants were assigned dolls and asked to design an updated girls’ outfit, inspired by the doll, her story, her fashions, and her accessories. The designers also had access to fabric from the doll’s designs in addition to their regular trip to Mood.

Before I get into the designs, some random thoughts: 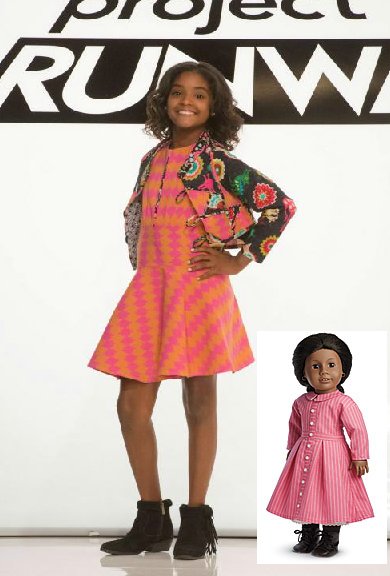 Amanda and Addy: Amanda made a cute little dress drawing on the pink in one of Addy’s outfits. She was inspired by Addy’s quit on her bed. 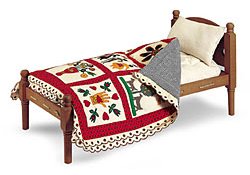 It is a decent enough entry and you can see the inspiration. I do wish this had been a little more exciting. 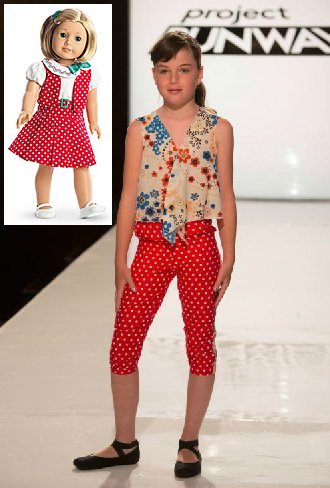 Alexander and Kit: Kit has so much spunk and this outfit had none. The pattern mixing was a good idea but the pants are awful and the top is shapeless. It would have been interesting to see a new take on the Peter Pan collar with something a bit more modern on the bottom. 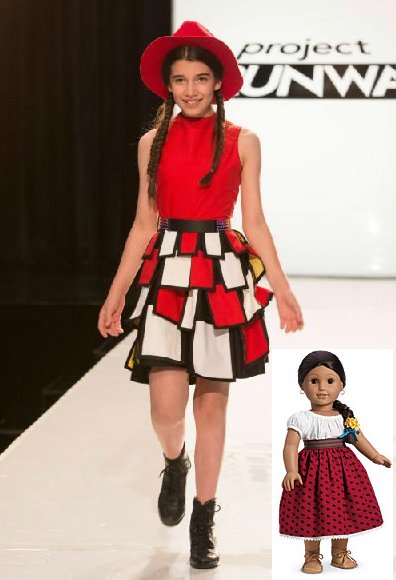 Korina and Josefina: This was boldly graphic and adorable; sophisticated but sweet. The pop of yellow to represent the memorial yellow rose Josefina wears in remembrance of her mother was thoughtful. The styling was impeccable. The biggest problem was the finishing. When the cameras zoomed in on the sloppy finishing, I thought Korina might be in trouble but the judges overlooked it. More of a concern to me is that the effect was a little heavy and I had an impression of this being a bit “crafty,” rather than fashionable. If this design had to be reproduced, cost would have also been a problem. 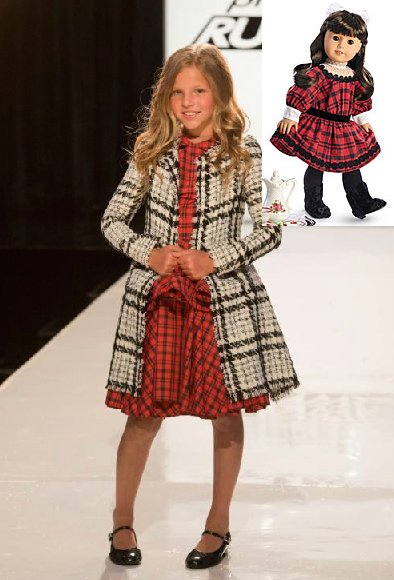 Kini and Samantha: Kini focused in on the luxury of Samantha’s new found wealth. The outfit he designed is definitely one I could see in American Girl’s holiday line. I don’t know if it is “updated and fashion-forward” so much as it is timeless. Every year my grandmother would go shopping at Saks for a special occasion outfit for me and a new winter coat. These two items would have worked back then just as well as they work now. 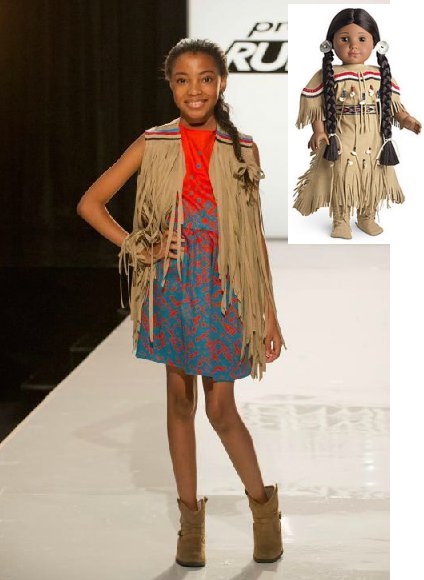 Char and Kaya: I wasn’t a doll kid growing up but, if I were, Kaya would have been my favorite. The vest was adorable but had a little bit of a “dress up” and costume feel. The dress, on the other hand, was so sweet but did not really draw too much on Kaya. While cute, compared with the girl outfit available for Kaya’s line, this outfit falls a little flat. 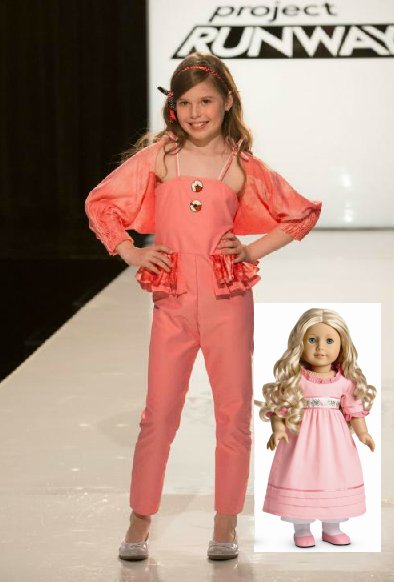 Sandhya and Caroline: How elegant Federalist era Caroline transformed into a toddler clown, I cannot understand. Even ditching the nautical appliques couldn’t save this one. I won’t even scar you with the snaps on the back. I haven’t really liked Sandhya’s outfits this season, except the one time she was safe in the jewelry challenge, but I did enjoy her final collection. I suspect that Sandhya does not do well with this format because while she can work within time constraints, she needs time off to step back and look more objectively at her work. I appreciate her ideas but the so often fall short of that transcendent moment where the absurd becomes art. I’m sorry that she and Fade are out of the running (barring “twists”) but I cannot disagree with this auf. Sandhya refused to listen to Tim and the judges and that, as much as anything, knocked her out. 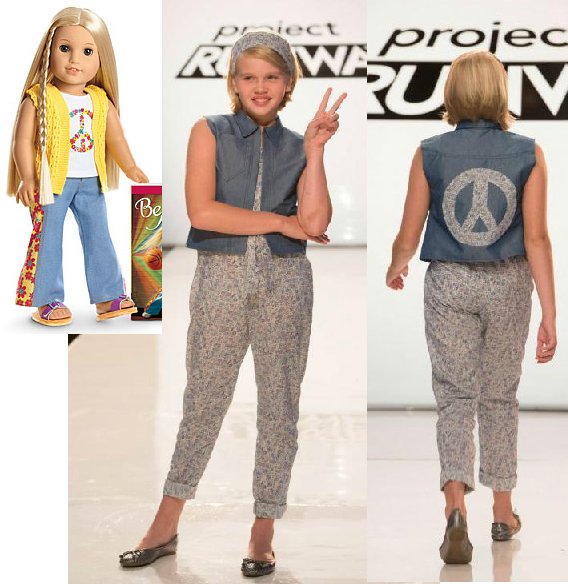 Sean and Julie: This should have been an easy one to at least arrive at safe ground. Seventies-inspired bohemian can be a lot of fun, if not particularly innovative. This, however, is something out of a Sears catalog, circa 1973. You might wear this house painting. And the Mercedes sign on the back? I might have eliminated him just for that. Who messes up a peace sign? There’s one right on the doll’s shirt! 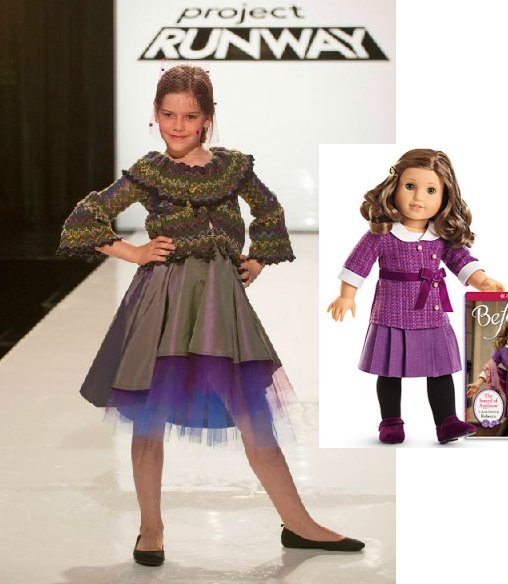 Emily and Rebecca: When Emily started talking about her awesome children’s line, I knew that wasn’t a good sign. Pride always goeth before the fall on Project Runway. The grey overskirt was a bit drab and the silhouette was too shapeless but I didn’t think this was bottom two. The sweater would have been cute with a pair of purple skinny jeans. The tulle underskirt was a cute idea and a nice pop of color but it needed a different top.

Congratulations Kini and sorry to see you go, Sandhya! I know I will be tuning in next week (Thursday 9pm EST) to see what is in store with Project Runway!